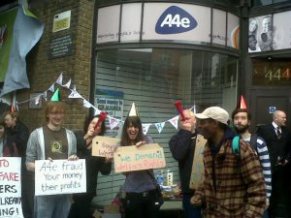 In a major victory for campaigners, two of the main workfare programmes are to be abandoned the DWP has quietly announced today.  Private sector contracts to run Community Work Placements and Mandatory Work Activity will not be renewed says the department in their response to George Osborne’s spending review.

Community Work Placements involve six month’s forced full time work for the long term unemployed, whilst Mandatory Work Activity is a four week short sharp shock of workfare used to punish claimants who were judged not to have the right attitude by Jobcentre busy-bodies.

Hundreds of charities have pulled out of both schemes or boycotted them completely after furious campaigning from Boycott Workfare, Keep Volunteering Voluntary and claimants across the UK.  Recent performance figures showed that only half of those referred to forced community work actually started a placement.  Eighteen months after Community Work Placements began the DWP is