For sure, we knew that the Conservatives and their media allies were completely shut off from morality. And we also knew to expect the worst of their appalling smears and dirty tricks to land in the last few days before the General Election. But even so, the last twenty-four hours or so have seen them hit startling lows.

Firstly, we had ‘Punchless-Punch-Gate’, in which Robert Peston of ITV News and Laura Kuenssberg (uurrggghhh, not her again!) of the BBC uncritically relayed over social media claims that a Conservative Party advisor had been punched by a Labour activist during a visit to Leeds General Infirmary. 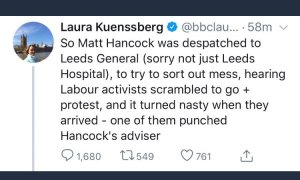 Laura Kuenssberg’s original, unsubstantiated tweet, since deleted, accusing Labour activists of physical assault. Yet another BBC ‘mistake’ that benefits the Tories or denigrates the Labour Party.